The attention cycle for games

Ever played Farmville? any game that is similar to Farmville, where you had to do something every so often? If you did, do you still play that? Here is a look at a couple of games and the attention cycle for these.

I guess it was a couple of years ago, when Farmville was what I was hooked on to, it was fun, and it was a lot of despair specially when the crops died on you for not attending tot hem in time. The irony is many (including me) were more bothered with the timing of items and tasks in the game than in real life. In about 3 months or so, after leveling up to a good number of levels, I weaned off Farmville. At that time I did not think much about it other than the fact that I had too many thing on my plate then gifting horse/sheep and pigs to other facebook friends. I swore not to get sucked into it again.

However during that time it while I would wait for a Farmville task, I was playing Mafia Wars and Yakuza Lords. Unable to keep up with the Russian, Mexican, Thai updates, I focused mainly on Yakuza Lords, and at that time since the game was new, I managed to complete it, till the end, all of the levels that were offered at the time. So the challenge was over, and the game held no more playability for me.

So, the first thing that makes a games "sticky" is "the challenge". That is what brings a player back to the game, after all it's just a game, we can definitely beat it.

After about 2 years or so, there is an iOS game called Peter Rabbit's Garden. I was hooked on to this for research purposes and even before I knew, I was planting crop and harvesting it again. The game's graphics are taken from the Peter Rabbit series. The game has undergone several updates (to fix a lot of basic problems in navigation, etc). The challenge was there, to level up and find all the characters and bring them to your garden. You sell your crops in the market to gain money, each market expects a minimum number of crops, so you need to have a larger basket to reach a new market. Randomly, when you sell the items, you also get a page from one of the stories, you need to collect all the pages (that is also a quest).

At about this time I found SuperCell's HayDay, a lovely bright, colourful animated Farmville type game with fun animations and feel. It was very very addictive, given that each of the animals, characters, etc are interesting when animated, the Pigs look lean and point to their mouths suggesting "Feed Me" and when they are ready for Bacon Harvesting (no animal cruelty involved) they are put into a kind of a sauna, that slims them out and extracts the bacon. The chickens fatten up when ready for egg harvesting or the sheep fluff up with wool and when sheared, they turn into dark scrawny looking animals. When you progress, you get more crops, you can buy newer animals and items. In this game you have a Barn and a Silo for storage. The Silo stores the crops, to expand it, you need to collect items that help expand the silo's capacity. Same goes for the Barn, to expand it's capacity, you need to collect items. These items are randomly offered when you harvest crops of collect from animals.

Both sound fun and engaging, but the problem that I found with it is

Peter Rabbit:
1. The pages are offered to you randomly, even if you have the page, so while you wait for page 3 (for example) you might get pages 1, 2 and 4 several times over, frankly quite frustrating.
2. There are tasks that hinge upon buying items, crops, decorations and then there are some that involve using Candy canes, which can be purchased using real money though this does not stop you from progressing in the game. 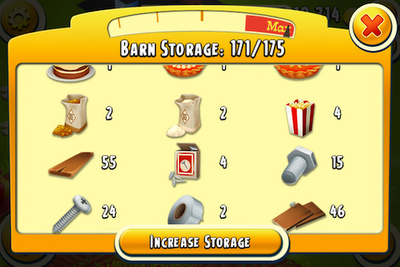 Hay Day:
1. Like the pages, the items that you get most of the times is wooden planks and screws. These keep taking up space in your Barn Inventory. In the attached image, you can see the Barn Capacity is 175, of the 171 items in the inventory the break up of the items is as follows

This leaves space for just 19 items, in an inventory space of 175, 19 items. That is nearly 10%, 90% Wastage, So while performing the tasks, you need to combine items to create an item. Like to create a Eggs and Bacon, you need 2xBacon slices and 4xEggs. So in the quest where you need to deliver 3 cheese, 1 cake and 2 Bacon and Eggs, this is simply not feasible. When the ship comes and request 10 bags of sugar and 2 cakes, and so on, it is *Impossible* with 19 slots. The worst part is that the items cannot be discarded or sold.

The other problem is that the developers rely on the in-app purchases of Diamonds that help speed up tasks. The placement of the use diamonds is place in such a way that you end up using them for the silliest of things, there is no UNDO or a failsafe. For the first time I did write to the developers informing them of this problem, the only response was that I can sign in with Game Center to sell my items, while that feature could not be found, despite the game welcoming me back with my GameCenter account.

The game as it stands is unplayable at this juncture, so the most logical option, stop playing it. There have been three updates since the time I wrote to them and there has been nothing that has been done to rectify this situation.

Like Challenge is the factor that makes a game Sticky, challenging the user with an unplayable situation and expecting them to buy in-app will not make it any better. In fact most of the freemium games rely on the users making in-app purchases which I understand but there is little thought put into the actual playability than finding a way to make a buck.

You can see many other games where a lot of users are unable to play it without making in-app purchases.

There is a new kid on the block, Simpsons Tapped Out, it has been capturing my attention for the past few days. It relies on in-app purchases, but it also gives you free donuts which are the in-game currency for speeding things up, etc. So far it looks like EA have done a good job and given the Simpson franchise, a lot of users will download it and the quotes, characters are quite amusing.

Let's see how long can this game capture my attention. Or as Homes says in the game when you task him to clean up Springfield to raise some cash, "What Work? I though this was a game".

In summary, as a developer I want to also find the magic formula that makes the millions (as I have not yet achieved that) However the journey does involve learning and from the lessons learned, they are
1. Graphics -> Cute animated graphics will always attract more players
2. Price -> A Free game will download more than a paid one, more so if it is good
3. In-App -> In-App purchases will definitely help, but do not bolt a game around a store, instead weave the items into the game and make the game playable with and without the in-app purchases.
4. Design -> Look for design flaws and rectify them if you find them or are informed of them.
5. Updates -> Updates that add more in-app items or fix not displaying the Big log earlier are not exactly the 100MB+ updates that users prefer, fix the logic problems.
6. Story -> Add a story around the simplest of games like Pacman or Frogger and you have success
7. Challenge -> Human Ego needs stroking, Highscores, Leaderboards and good challenges are also a way to retain and bring in more users. However, refer back to #4 and be reasonable with the expectations of the game.
8. Luck -> The one thing that is not tangible for a developer
9. Marketing -> What ever the game, it needs to be promoted, users need to know about it and need to have a feel of it.

If you do touch upon many of these points, you can have a success on your hands. Maybe next time, we shall look at some of the Successful and not so successful games and dissect them to see the good, the bad and the ugly.