In part I of this article http://howto.oz-apps.com/2012/11/games-with-grids-tilemaps.html, we saw how a board can be set up with grids where each square has a tile to represent it. In this second part of the article, we shall look at how we can scroll the tile maps to display a larger map than one that can fit the screen.

While it seems like a difficult task on scrolling larger images or tile maps, it can in fact work out to be quite easy to implement. To see how we would do that, let us have a look at a simple example. 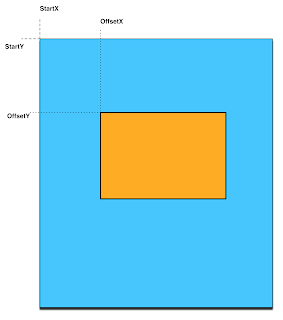 When we move the display window to the extreme bottom right edge, we would see nothing because the offsetX and offsetY would sit at the extreme edge of the image. So to ensure that we never end up with moving the display window beyond the image, the maximum value (maxX, maxY) that offsetX and offsetY should never exceed imageWidth - windowWidth and imageHeight - windowHeight. 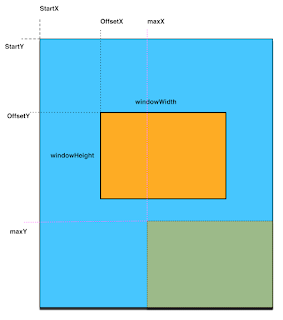 Now that we understand this bit, we can use this knowledge with our tilemaps. In relation to our grid maps, we can define that we would have our display window to be of dispWidth squares wide and dispHeight squares high, where as our entire tilemap could be fullMapWidth squares wide by fullMapHeight squares high. And we can calculate our maxX and maxY as fullMapWidth - dispWidth and fullMapHeight - dispHeight. With that math out of the way, now what we need to do is simply display our tiles that start at offsetX till offsetX + dispWidth, this gives us the dispWidth number of tiles starting from offsetX.

To draw the board, we would use a simple loop which displayed a tile at the currrent position and then increase the position to display the next tile.

As we alter our offsetX and offsetY, and call this function drawDisplay, we can see the updated tilemap. increasing the offsetX and calling the drawDisplay function would provide an illusion of scrolling left. as we discussed a while earlier, we should never let the value of offsetX go beyond maxX so that we do not get blank areas.

Calcualting which cell was tapped

Similarly determining the square that was tapped on the device can be calculated easily from the touch point x, y as follows

Now when we want to scroll, we can simply alter the offsetX and offsetY parameters to scroll and update the tilemap.

That's how easy it is to manage scrolling and tilemaps. In the next part, we shall look at displaying the tilemap (and specific calls for various frameworks) Your feedback would be most valuable and welcome.
Email Post
Labels: Android Article iOS Lua Series