The real cost of "Free" with in-App purchases

http://techcrunch.com/2012/10/23/zynga-layoffs/
However, the point mentioned in the second article on why Znyga failed and the last heading in the article that the screens got smaller and so did the margins is not accurate. 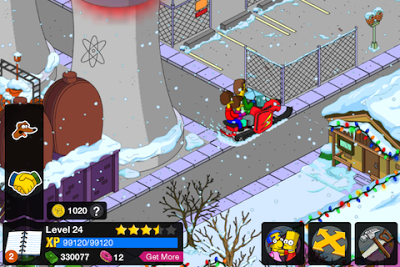 This prompted a little thought on what is the actual cost of a Free game for the player (not from the publisher's perspective). For the illustration of this point I am using the EA App, Simpsons Tapped Out. This started off as an app that was fun, like farmville and the sort. Over the period of some time starting with just Homer and Lisa, my Springfield is now level 24 and has quite a few characters roaming around. I had about 27 odd donuts and now they are just 12 (strangely despite the fact that there isn't much that can be achieved with them at those numbers) Earlier you would get one donut every time you leveled up and on completion of tasks, now they are hardly given out. Then for Christmas, EA introduced a new currency "Santa Coins" which would soon cease to be of value come Jan 10th. 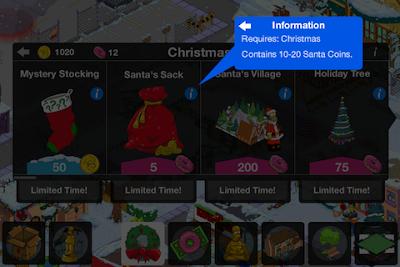 For every task you perform you get money and XP (points) with this XP you advance levels and with the money you can buy stuff like land expansions, buildings, etc. Though buildings take in the range of 24 hours to build and provide an income in defined intervals. Some building and structures are premium stuff, i.e. cannot be purchased via the in-game currency but require to be purchased using donuts. At one point prior to Christmas the XP got stuck on level 21 and some 52000 points any new XP was just wasted and did not add to the XP score. The same has occurred now and is stuck at 99120.

Cost of the Donuts vs Buildings/Characters
This is what actually got me and prompted this article, while the game is playable without having to spend a single cent via in-app purchases, but if you get attached to the game and want to bet the specials, like Dr. Nick or some of the bullies or the Aztec theatre, etc that provide some characters optional tasks. The squeaky voiced teen can take up ushering at the Aztec theatre but when it does not exist, that option is not available. 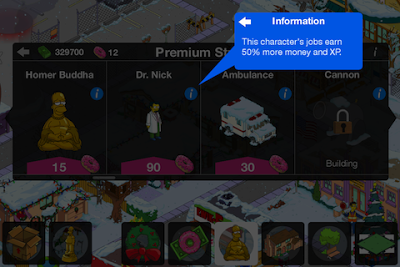 Looking at the costs of things, here's a list 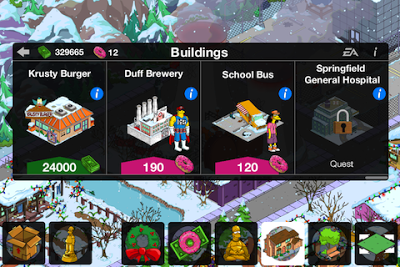 amongst other things and since you cannot get donuts easily, you have to buy them from the in-app purchase and they cost as follows 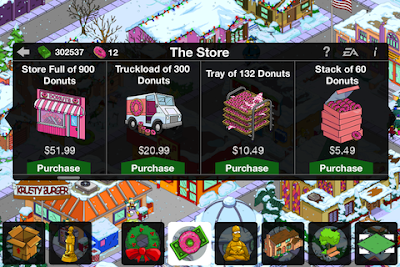 Generally most users would buy these in smaller portions and there is practically nothing one can do with a smaller number of donuts other than speed things up, where the average cost is approximately 2-4 donuts at the minimum. From a financial perspective, Santa's lab would require a purchase of "Truckload of 300" for $20.99. Hans the moleman and Kearney are $5.49 each. Frink's Lab and Krustylu's Studio are both about $20.99, the Aztec Theatre, approximately $10.49. You can do the math, the point being that each of the virtual character, etc in the app are worth more than the actual figurines that you can buy from Toys 'R' Us or specialty stores.

If there are users that are spending that kind of money, say $109.99 to get a boatload of donuts I am at a loss of words. If this game was not Free but costed money on the iTunes store, what was the price upto which someone would have purchased this game? What would be the point when someone would say, that's it. Would it be $0.99, $1.99, $2.99, $4.99? I am sure that many would have avoided this game and not paid a cent more than that. However with the "free" price tag, people are happy to pay in excess of $10 for just one building... 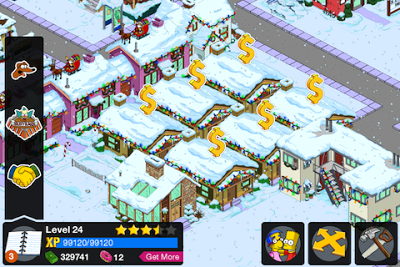 That is the true economy, where people spend on things that are from a practical perspective "pure wastage" but then that is my personal perspective. The take home from this is that the gold rush is over, apps are being smothered by many other apps, you can make knock-offs of apps that are successful and get some mileage, make another Canabalt, another Super MeatBoy, another AngryBirds and the list goes on... However with this freemium model, you can make what you want, keep updating it mid-way (Tapped Out would download approximately 40MB updates every second day, over a 3 month period, that equates to approximately 1.8GB worth of updates and the app update for the Christmas special has now upped this to 80MB of updates.

If these are the kind of margins/revenues and there are people that are happy to spend that kind of money, then the revenues earned by Zynga are anyone's guess (on the higher side) and it would be strange to fathom as to why they had to shut down, are their own apps cannibalising the other apps? or are their overheads too high. Whatever the case, the point made by TechCrunch that the screens are getting smaller and so are the margins is not true as with the smaller screens I would believe that the volumes have increased and thereby making it a very viable platform.

On a side note, the companies that really know how to make money (the greedy ones) are the ones that always sell you points in denominations which can never be consumed evenly and the remainder is almost useless. Tapped Out is not the only one in this, take Microsoft Points, you can buy 1500 or 3000 points and when you use them the remainder are nearly useless unless you buy more of them and after a substantially large umber of recharges, all of the remainder points would be worth one large purchase. Look at the Frequent Flyer points on most airlines, FlyBuys (or whatever the equivalent in your country) Loyalty points, etc.

For developers, this can be a case study on how users can end up paying more for your app rather than buying it for a small nominal amount (setting the price of an app can be discussed in another article) and for the users, if you are happy spending money, please keep it up after all Apple does not pay the cheques from their pockets but from your purchases. 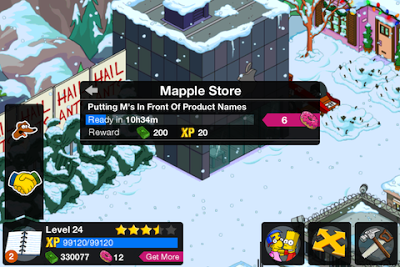 Images are all taken from the EA game "The Simpsons Tapped Out"
Email Post
Labels: Article Thoughts