The first issue with frameworks is that you are unable to use the more advanced features that the framework offers. So as a developer you would miss out on implementing the cool latest features for which many (including you and me) might have upgraded the devices to a newer build or version. Some frameworks call it plug-ins, some Enterprise features, whatever it is called, it involves rolling up your sleeves and peeking under the bonnet. Not really

If you have been following my articles, then you must have read this one published about a year and a half ago, http://howto.oz-apps.com/2012/03/place-your-app-in-newsstand.html it is a surprise that while Apple build a wonderful framework, that is the one feature that many attempt to hide/remove from their devices (with mixed to no luck). The code from the article still works as it is all about setting a few settings in the plist.

Then there was extending the display to an external source using the TV Out (Cabled option) http://howto.oz-apps.com/2012/10/using-tv-out-for-extra-information.html This is one wonderful feature that is available only for native code developers using Objective-C however to make it work with the frameworks would involve a fair bit of work on part of the companies. It is a bit of a let down that this is not offered, it would open the doors for multi-player, external/additional displays, etc. Give it to the developers, they will use it types. The existing uses are in a racing game, while the action is on the main screen (maybe a giant TV), the device displays the track and other details.

Then there was the article on passing data and reading the clipboard using Gideros and not using Plug-ins or Enterprise features which can be found at http://howto.oz-apps.com/2012/12/objective-gideros-extending-to-include.html This article demonstrated three features, accessing the clipboard, passing data using a custom URL format and using preview to display excel files or other files.

One of the things that has stumped many developers using Lua frameworks is the ability to scan barcodes, I have been visiting and revisiting a couple of these libraries that offer barcode scanning, but it did not seem worthy of spending time on creating a plug-in around the libraries for a one off project. Then I found a wonderful app called Pic2Shop, it is available on the app store and what it does is scan barcodes. This would be of absolutely no use to you as a developer if you wanted your app to scan and display information rather than the barcode app. Fear not, this app has a wonderful feature, it can scan and then return the data back to your app to process. It is a helper app in that sense, it handles all of the camera and scanning, etc and then sends the resulting data that your app can process. For those still in disbelief, here's a video of the same running on the device.

The video is at http://youtu.be/zRegwxt53SY Since it is captured using AirServer, the touches and taps cannot be seen. I am sure there is a way to display that, but till I get the hang of it, here's the video to demonstrate Barcode scanning from a Gideros app.

Screenshots of the same 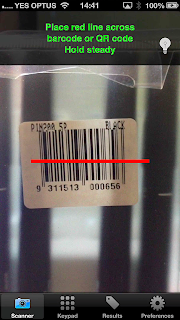 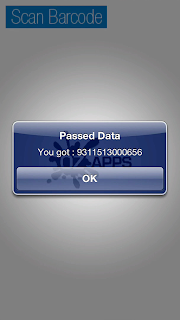 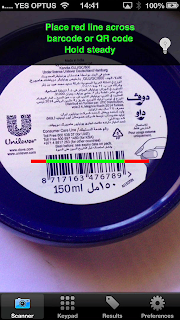 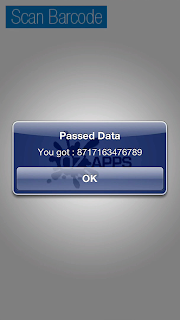 Hope you like what you see, the website has quite detailed information on how to integrate their product in your own app and use. Good news is that they also have an android version that could be integrated. So here's adding Barcode Scanning to your apps the easy way.