While we generally enjoy the GUI applications and designers strive to get the design awards. Despite all this, there is a certain something about command-line applications, the terminal fixed-width font and ANSI colors. While we are so used to autocomplete and syntax highlighting, there are some command-line utilities that allow us to enjoy most of these. This is a small compilation of utilities that help develop applications in various languages.

Amongst developers, dotNet is an increasingly popular choice of language and with the release of DotNet Core, you can run it on Windows, Mac OSX and Linux. Since most of the apps I run are on a Mac, this is dealing with the Mac version of C#. On the Mac and Linux, you need the Mono runtime libraries.

With dotnetcore, you get the dotnet command-line tool that allows you to generate project templates and create C# projects. However, the first utility is called csharp, this is the C# REPL that allows you to write C# code and run it.

The next most popular thing out there is Python, which comes with a REPL that allows you to run code. Simply typing python would start the REPL for you.
There are other python REPL shells that offer more functionality. Starting from ipython (did not impress me much) then you have bpython that has some popup details for available libraries and keywords, making development with python easier and better.

The next REPL to program is swift, the reason this is at #3 and not the first is because Playgrounds are the best way to work with Swift (if your machine is able to handle the loads and not keep crashing sourcekit or xcode entirely).

These are other amazing command-line utilities that are not programming languages and are useful.

I love my terminal, however there is an alternative terminal called iTerm that has added functionality than the in-built terminal.

I Love my Bash shell, though I tried OhMyZsh for a very brief moment only to switch back to Bash. However if I am not writing any shell scripts and want to use the shell more so for commandline utilities, there is an alternative shell called fish, this is available in both a shell or an app. It has auto-completion which uses the shell history and filesystem etc to provide feedback to the user. It has amazing feedback in the form of color to indicate available commands and turns it red if it does not exist, the filename/filepaths are underlined.

If you are a developer, then you definitely use Git and working with Git from the command-line is interesting, specially when you want to list the commits and other details. tig is a command-line utility that gives a textual interface over git, allowing you to work with git better. 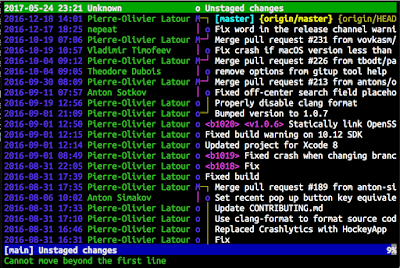 If you have been around in computing since the 80's or the days when DOS was quite popular and Windows was the new kid on the block, there was a utility called Norton Commander, this was the equivalent of a file manager in the shell. Then there was a popular clone called Midnight Commander and a GUI version too. A lot of utilities were modeled on this structure. It is still available as mc. 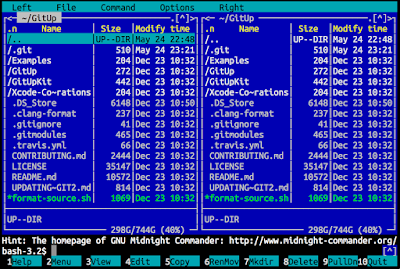 To finish this post, I must mention this interesting utility, it is a command-line music player which is quite amazing, called cmus. 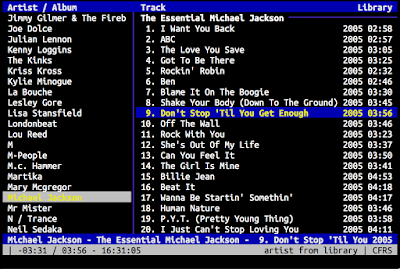