About a few days ago, there was a video of Walter demonstrating the blazingly fast graphics on CoronaSDK, thanks to some rewrites. This was following a series of posts from users that their tiles were showing up funny and the finger was being pointed towards Lime. It was soon clear that Lime was totally innocent, as the problem was with the build of CoronaSDK. So this new release was like a energy pack when the player was down at about 5-10%

Surprisingly, a lot of builds are made for reasons that are non developer related or related to bug-fixes. Ansca break off with Papaya Mobile, there's a build without the Papaya stuff, Ansca tie up with a new company, here's a new build that has their SDK bundled.

So when this new build 759 was released and had a long list of things that it would address, it seemed like the guys finally were getting their priorities right. The video that showed 1,000 sprites and tweets about 1,000 and 5,000 sprites were all fine. In reality, how does it really perform with simple graphics?

I have just created a checker board with squares and a border of 1, It is run in the iPhone simulator with build 714 and build 759, as you can clearly see, that the new build 759 does not display the horizontal lines between the squares. 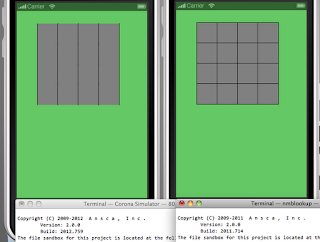 This would generally be the case when I ran something on the iPhone 4 simulator on the macbook, or when the simulator is zoomed out and tries to display an image in reduced size. This is the iPhone simulator in 100%, so I tried to have a look at the same example using build 759 on various devices. The results were far from acceptable. It worked on the iPhone 4 but failed to work with any of the Android Devices. This was qiute perplexing and unclear on why would it not work with Android at all? Maybe it is some blazingly super fast optimization that culls all graphics for Androids to render the performance that CoronaSDK needs on an Android device...

Then the comments in the build section found http://developer.anscamobile.com/corona-daily-builds/summary kind of provided some clue. Maybe they have disabled the Android graphics entirely for this build. "Android, the bane of our existence: removing OpenGL optimization b/c Android devices have buggy implementations" Don't know much but it seems that Ansca need to put in more testing, even though the builds are what would be called nightly builds in comparison to the stable builds, but the difference between two stable builds is loosing half your app market, the last stable build might have been supporting ARMv6 and by the time the developer test and purchases CoronaSDK, there is no more ARMv6 support even for iOS. So the features that change between stable builds are like an eternity, the changes even between these Daily builds are quite jarring. In one build you can support Facebook in a particular way, in the next build there is a completely new way to do so. If you use the build that offers email functionality, then you cannot do A,B and C, if you want A, B and C, then you have to forego the features G, H and I. That is a bit too harsh...

This is just the icing on the cake, no more Android display, if Ansca had taken this stance at the very start, a lot of developers would have stayed on and a lot of features that were iOS only could have been included. Then who know the stories behind all of this.

UPDATE:
There are other interesting stuff that have transpired, like

There is no more support for JSON build into #759
Rectangles now render as Triangles, (this is blazing fast cutting edge graphics after all)

Here is a screenshot (All graphics copyright of Mongadillo Studios) from one of the games that I have developed for a client, Mongadillo Studios Inc. that many of you must have played and known as ZDAY Survival Simulator