When the "greatest CEO of the century" killed the HP Touchpad, there were two things that happened.
1. A lot of people got their hands on a HP Touchpad which they would not have purchased otherwise, after all $99 or $149 was too good to resist. A crappy Huawei Ideos phone was more than $199, the real bottom of the range Android devices are around the $130 mark.
2. It killed the device off the HP Inventory but created a parallel community that worked with these devices modifying or developing cool stuff for the same.

Leo Apotheker will be known as the greatest CEO because despite what people might think of his decisions, he was the only one that laughed all the way, his decision did not cost him anything, in fact it gave him a cool golden handshake. Which if he was intelligent, he must have just purchased Apple shares for a couple of millions. The company and the shareholders were left behind to pick up the pieces.

At the time when I headed to the local Harvey Norman store to pick up a Touchpad, they were all out of the 16GB $99 devices and all they had were the $149 32GB. I picked one up, I wanted two, to be able to pair, etc, but they wouldn't give me two. How much does a 32GB USB drive cost? As of today it is about $70, so a 32GB space with a touchscreen Display, a 1GHz CPU, at nearly twice the price is too good. The HP Touchpad was not entirely flawless, the largest issue it faces is the USB Charging, it is temperamental, it needs to be yanked, pulled at an angle to get it going. The glossy device is just too glossy and gets fingerprints all over the device. I had it in the plastic wrapping, dunno why I pulled it out. It had a wonderful processor and an equally wonderful OS.

The Touchpad with the Palm OS was good, but it just begged to be prodded and extended, thankfully, HP themselves authorised the use of Preware. Then there was the Ubuntu chroot option, so half of my 32GB is allocated as an EXT3 partition and runs Linux quite well. There were a lot of posts about an Android port and it was slow. I got around to pushing the Android port onto the device while I had some time trying to upgrade my Snow Leopard to Lion and restoring backups, etc. I have the HP Touchpad running Honeycomb or Android 4.0 I do miss the flick the screen to place the app in the background or to kill it, but I must say that the Touchpad is an amazing device running Android. It is classy, flash and just amazing. Plus it is dual/triple booted whereby I can boot into Palm when I want, but why would I do that?

I have an Amazon Kindle Fire, it is a good device, being outside of the US, I cannot do much or rather anything with it. It was more for testing while working on a project and it served its purpose quite well. However it also exposed the problems it had (apart from not allowing me to install any apps) like despite having 8GB of space, it had limited apps memory space. A couple of Android Indie apps, and the disk is running low. The icons (which is documented) are low res and so on. So, back to the Touchpad running Android, it identifies itself as Galaxy Nexus, because I got an email from Google when I signed in to the Google Play Market congratulating me on the purchase of my Galaxy Nexus.

I have installed a couple of apps, all of the Angry Birds are free on the Android platform, including the new Angry Birds in Space. All of them work absolutely smooth on this device. Next, I wanted to test one of my own apps, so it was simple as compiling it and placing it on the webserver to install on the device. Here's what happened.

1. CoronaSDK - Using the CoronaSDK, I tried the Kindle Build with a debug signature, it told me that the application was corrupted and cannot run on this device. Then it was trying with the normal Android Build, same result, no go. So, I take it that there is some issue/problem with the CoronSDK build .apk and the Android device running on the Touchpad. While it makes no sense, it would be worth waiting to hear from Ansca on this.

2. Gideros - Using the Gideros SDK, I got the app installed and running at full 60fps on the device without any issues. I need to try installing the Gideros player and then see how it works for development.

3. AIDE - This is one of the best things, think of this to be like Codea on the iPad. I did say think of it LIKE, Codea works on allowing the user to run the lua code on the iPad, where as AIDE allows the user to code, compile and deploy an APK all from the same app running on the device, phone or tablet. Something that a lot of developers would have done if Apple allowed for such a thing, (then they wouldn't be able to justify the need for a Mac anymore, developers would be working with iPads alone).

If you are a Touchpad owner, one of the few millions that got a chance to snag up one or more devices (on the day that HP sold them at a bargain) or if you have managed to get it off a friend or off Craig list, etc you must try the Android port. It works, you have sound, WiFi, touch, the works. The way to do so is quite simple. It is all about placing a few files in the "cminstall" directory, note that the directory name is important, as it is the directory that is used by the device to start the installer from. If you have copied the files right, you need to just get it all started, which is perhaps the only time when you need to use the terminal and the novacom utility. I have flashed the iPod/iPad/iPhone since the 1st gen iPods, the ones that were identified as does it have the John Lennon or the Macy Grey on the cover and does it have Google maps. Including some attempts at Jailbreaking the 1st Gen iPod to test the various springboards, winterboards, etc. Compared to that experience, flashing the HP Touchpad with Android was much easier and it just involved watching the screen with the messages scroll by and then in a couple of minutes, Done... restart and you are in Android.

This was perhaps the only device that could have given the Apple iPad a run for their money, admitted that it is not as Aluminum and sleek as the iPads, but had a very good OS/specs going for it. If it were sold at >$500 mark, it could have met a fate like the RIM playbook, no takers.

The community that worked so hard to bring all the wonderful things to the HP Touchpad must be thanked. It is rather unfortunate that some other companies like in the case of Ansca, are so money minded that despite them having a production ready version of CoronaSDK that compiles for the Touchpad devices, which they could have released as an offering to the community (they were very interested to tie up with the Palm division if this had not gone belly up). If they do release a free community edition that compiles and creates apps for the Touchpads, it will bring them more revenues, despite offering this for free. Well, that’s for their CEO and Marketing and Co-founders to decide, it would have been nice on their part to have done something for a device that had the making but was killed because of the CEO that nearly destroyed the HP giant due to one decision.

Here's a few pictures taken from the iPhone camera than screenshots.

The lovely lock screen, that either allows for unlocking or using the camera (which does not exist on the Touchpads, the front facing camera is used for?? I haven't seen it activated ever. Even in WebOS, skype cannot access this camera) 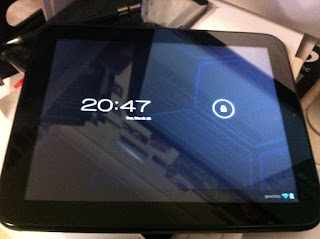 The screen with a collection of some apps, there are about 7/8 of these spaces to place the icons/apps/widgets 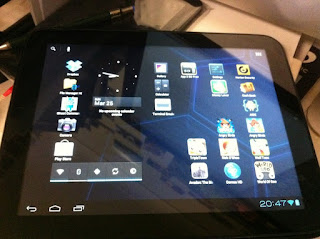 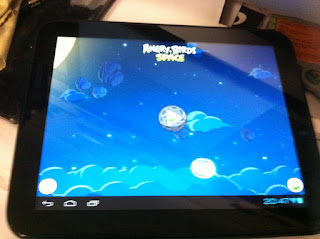 And the AIDE project window with a default Android project stub 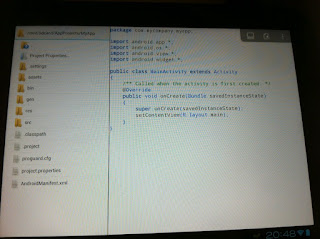 The boot options for the touchpad 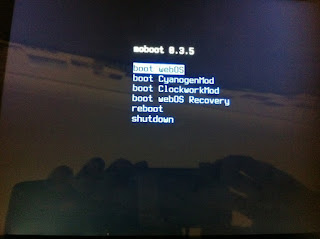 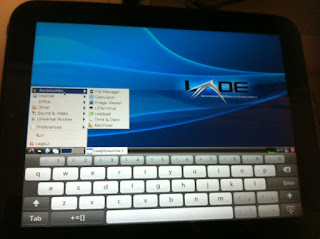 The linux kernel as a page on the WebOS, I think even Windows would struggle having a linux running as a page in the background, but not the Touchpad. 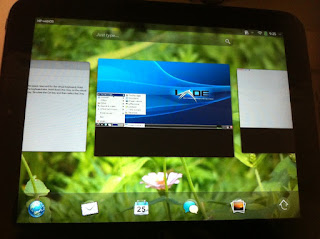