Originals as Inspiration vs Amazing Copies

After the success of Flappy Bird (yes, I am using the example of Flappy Bird as an example, a couple of years ago it was Robert Nay, the 14yo that made a game that was downloaded millions of times), there are several hundred clones of plain Flappy Bird, flappy whatever from bats to fishes to octopuses and even underwear. Not only did this take over the Mobile iS and Android but also the Mac App Store. To tell the truth it is sickening. However, let us go back a couple of years to talk about Farmville from Zynga
Farmville is definitely an app that majority of people have heard of or wasted a major portion of their life on. Digital crops and Digital strawberries that wilted and died. Time wasted at the expense of other good things that could be achieved in life. Either ways you look at it, it was a success and got a lot of people hooked on to it. Then came Farmville 2, it did not entice people as much and I guess many had weaned off the virtual farming. However in my case, not before I spend time on Hay Day from SuperCell. This was an amazingly slick looking Farmville clone. I would have stayed on with it but there was one issue with Hay Day, that I did let Supercell know, but since they were already making the millions, do they care? I guess not. The issue was that the barn would get filled with wooden planks and stuff and you could not just throw them away to make space for other stuff, so I reached a stage where I could not do anything and was forced off the game. That was a blessing in disguise. I swore not to get hooked on to any such stuff again. Till January 2014, when I was away overseas and my MacBook died on me. I got introduced to Clash of Clans... The countless hours upgrading, calculating when the shield will wear off and how much more elixir I need before I can upgrade the barracks to get a Healer, a Dragon, upgrade to get the Rage spell, etc. Harvest gems to get the third builder, farming to gain gold and elixir than to raid other players. In the meanwhile I also got introduced to Boom Beach, which was exclusive to Canada and Australia, now it is released to the world over. The concept is somewhat similar, train troops, harvest resources, buy training or upgrades and level up. Then I came across an article where someone mentioned that Backyard Monsters was the original game that inspired Clash of Clans like Farm Town inspired Farmville. So I decided to try out the Backyard Monsters.

In many ways Farmyard Monsters is the game that Clash of Clans is copied from, to the tiniest detail of offering 100 Gems to start with and two builders and the builders are 500 Gems each. The game has similarities like the time taken to upgrade the units and spawn the same. Technically you cannot fault the game Backyard Monsters, however if you have played Clash of Clans and Boom Beach, Backyard Monsters seems like the crap apps that are available on the app store. The graphics pale and the concepts fail in comparison to SuperCell's offerings.

My point was that how can a game that was copied be so different? It is all in the Graphics. If you have played Clash of Clans, you already know CoC, you should try out the Backyard Monsters to get an idea of what I am suggesting. It is literally like a project app made by a first year student. If you have never player CoC or Boom Beach, then it seems much better and fun as you do not know much about the units. Even when SuperCell experimented with the graphics in Boom Beach (twice recently) the game had suddenly become unplayable. The graphics has suddenly become heavy, it started to weigh and the units looked different, the UI a bit darker.

Copy as much as you like, but make it fun

As the caption suggests, Games are fun only if the player thinks so. The player thinks so if there is something there to entire the player. Another example that comes to mind is that of the app Threes. Since this is a paid app, I found the alternative - 2048. Have you tried searching the app store for 2048? The best that I found was called "Flappy Jack: Episode 2048 - Tiny Bird Go Smash" - SEO to the max. The app name is no longer the name but a series of keywords and you wonder what is this game about? Is this Flappy Clone, is this 2048, is this Tiny Bird (Tiny Wings) or whatever. It is another Flappy clone. The point still being that this shows up for 2048, disregarding this, there are hundreds of 2048 clones. 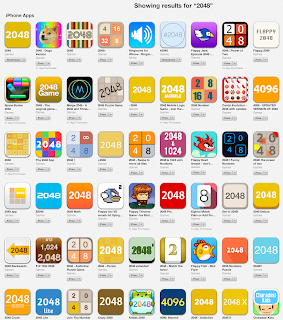 Which one would you download?? I have the first one that features in this list (image above) and the 6th one, called #2048. It is addictive and interestingly simple. However a lot of people would not consider that due to the Math Theme. Someone also made the Candy Evolution version amongst other interesting alternatives like the Doge Version (not the vehicle Dodge or the Chief magistrate in Venice, this is the authors spelling of DOG I think they were trying to spell doggie but since it sounds as dog-e) Another abuse of English spellings like "there app was selling well" and "your going to get a promo code"

Games will continue to impress and entertain us, but what I do not get is how does flooding the app store with copies of the same help? The apps are free and by saturating the app store, no on is benefiting. One would use the app that is listed first or on top of the list or if they have exceptional graphics. Get inspiration from other apps, but let you inspiration not be another crap app on the store, let it excel and be better than the app it is inspired off, like in the case of Clash of Clans and Monster Backyard. Here are some pictures to show the difference.

Download Backyard Monstors: Unleashed from here
and Clash of Clans from here.

VS Clash of Clans