When Apple announced this new feature, there was a lot of buzz and tweets about this being the next best thing. There were so many videos and articles about it. However unless you see it for yourself, no images would ever do justice or help you understand this. I have been working on my 2011 iMac (beefed up with 24GB RAM) but of late I moved to the 5K Retina and I cannot explain how thankful my eyes and brain are. Similarly, 3D Touch technology is similar while it is cool; you need to see it and experience it to know what it can really do.

We got a the 6s and the 6s+ for testing and showing our apps around. While it looked similar to the iPhone 6+ that I got last year, I could not know what was different. In fact I tried a long tap on the icons only to see the springboard shake them (to remove). This was a bit of a let down I was expecting to see something from all of the lovely screenshots and videos that I had seen.

Not to give up, I gave it a second go. This time around I pressed a little hard on the screen (after all this was not just capacitive but had this amazing 3D Touch technology) this reminded me of the Blackberry Touch phones that was released as a competitor to the iPhone 3 (it was a piece of Junk for various reasons including that it shut down the phone capability when the battery ran low) the entire screen was a clicker. So I pressed hard on the icons on the Home Screen and saw that the phone buzzed, on pressing on the Camera, it popped up some options for taking a selfie, picture, a video, etc. 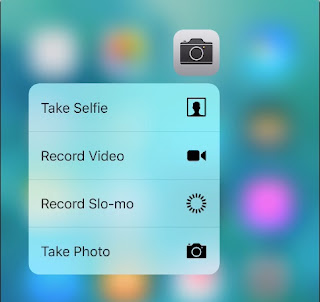 Now that I could see the options show up, I could see the potential that this technology could hold. The understanding and the mileage that each can get out of it is different. This is also open to using it in ways that it was not intended for.

The menus displayed can reflect the state of the application. For example the Mail program when uninitialised can display the option to add an account. When the account has been created, it can then display the number of items in your InBox, your VIP and the option to search and compose a new message.

There are other options available with the 3D Touch touch that can allow you to Peek and then Pop the item. Which means that it provides some additional information about the item (Peek) and then opens the item as the selected/main item (Pop)

From a developer's perspective, the simplest analogy is of Deep Linking, however the deep linking is based on Physical touch than URLs. The application receives a URL to open based off an option from the 3D Touch menu. The sample code from Apple displays these options and displays specific sections of the application. 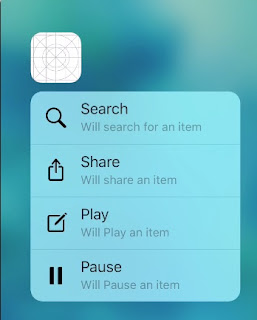 As I get some time to play with this, I will post more details about using and integrating this technology in your applications.