This are a lot of questions that has been asked by developers, one of them is iterating files in a given directory. They have tried hard to see if they can like in C/C++, enumerate and iterate through the files available in the folder. However it is a shortcoming of Lua (I believe) that prevents this from happening. However it is interesting to see Ansca staff jump at the chance to respond, but then fall short of delivering.

When I see a post / response from Ansca Staff, I take that to be written in stone as they would know much better on how things are, after all they are the ones that are designing the systems around Lua and definitely like any development organisation would have internal communications that discuss about the new set of features that will be made available and how they work. I mean it would be really silly to have a support team that would not be appraised of the issues or resolutions. In many posts it can be seen that the level of response for some staff increase way beyond their level of comprehension and understanding, so it would mean that it is supplemented by the core-development team. It is nice to see Tom, Eric and John jump in once in a while to respond to the forums. As I said anyone that responds with an official Ansca Badge, to me indicates an official response by Ansca the organisation on the whole. Given that over 75% of the queries are generic and do not need much technical inputs are managed well. However when the remaining 10-25% of the developers ask for a slightly more advanced request... I would really appreciate a proper response.

Let me be very clear, everyone makes errors, that's what makes us human. We individually as ourselves are allowed to be human, not with the hat of an organisation that is a commercial entity, this is not a home based open source group that we are dealing with, quite a few developers are planning to make a career out of this. So when there are pieces of information that are incorrect, or not provided in full, it is not exactly nice. Given that the API reference section on the site is an absolute mess and to get information about a particular API, one might have to look in several places on the site to get the appropriate information, if it does exist. Then if it does exist, there is no guarantee that it would be comprehensive and complete or even accurate for that matter. If it was not for the earlier developers that found these issues and posted resolutions in the comments on the API pages and responded in the forums sharing their information, CoronaSDK would not have advanced as a preferred platform. It seems that like other commercial organisations the focus is changing, which is a good thing and a bad thing.

Anyways, back to the point, I will be frank about this, I have the need to enumerate files in a directory, I am still looking for this claim from Ansca Staff on 27th of October that it would take a couple of hours to whip up an example, given it is 11th November I am still waiting for that piece of code.

Personally, there have been a couple of things that have made be a bit sad about the way things are, The simplest official response from Ansca could be *love it or leave it* but there is a lot of things that hinge upon the decision of choosing the platform apart from just the speed and ability for RAD (Rapid Application Development). I live with a simple principle, a Spade is a Spade. I offer these tutorials out of passion for LUA and CoronaSDK, which I still think is a wonderful framework for use. However it reminds me of the time when around 1994, we were contemplating using Borland Delphi or Visual Basic for development, I was bent towards Delphi as it offered me the ability to create native executables, which were considerably faster and offered much more in terms of system access. The decision was made by one of the directors that we use Visual Basic, since Borland might be a company that might fold, but Microsoft will still offer support and not kill their product. In about 6 years from there, they announced their DotNet platform and the demise of Visual Basic. Borland Delphi still exists and also supports the DotNet platform. Given that using Visual Basic has been quite fun and it is easy to create an app with it in comparison to slightly more tedious coding using Pascal and Delphi, that platform simply does not exist.

CoronaSDK might be the easiest framework to use as of date, but with the feature set falling behind so many versions, with other frameworks offering similar options with different/free pricing and the ability to create desktop apps. The charm of rapid development might wear off since it can't do this, can't do that and there is no sight of those features on the roadmap for a lot of versions. Ansca are trying their best to catch up, but their best does not seem good enough at this point of time. CoronaSDK will attract a lot of beginner developers, 10/11 year olds and the types, nothing wrong in that, but then by the time these will graduate into developers, they will move on to other platforms, that offer them with pure power on the system like Sparrow or Moai.

Please do not get this wrong, this post is aimed at concerns for CoronaSDK rather than an anti-post, these are some of the things that matter and most developers that choose this framework over others should ask. Can they achieve what their clients want of this framework? How limiting can this framework be and what kind of issues/complications can it create, specially if you are not making a bounding ball app using physics and lastly, are the Ansca Staff communicating and providing the correct and timely information. 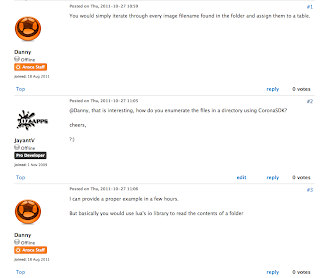 And if asking this question make the Venture Capitalists concerned about the users representing Ansca in poor light, then I am truly concerned that they do not understand the actions of their Staff but are more concerned about adding CoronaSDK in the sentence, "how do you enumerate the files in a directory using CoronaSDK?" If that word was not used, it would have been all fine. Amazing!!

It would take 10-15 lines of code in C++ and place that as a wrapper and include it from within the API, Apple does not have concerns about iterating the folders nor does Android. If Lua cannot offer these natively, these extensions can always be added by Ansca, given there is a perfect reason for not allowing developers from creating extensions other than in native lua source code, which kind of put the developer at the mercy of the user in believing that they will not share or publish that code anywhere, without permission and work with a limited API feature where creating wrappers to certain iOS API's are absolutely no work or issues at all.

It seems that given the situation, for scrollable windows, and other functionality it might be back to Objective-C or a combination using the WAX toolkit to integrate Lua with objective-C, Moai or Kobold-2D that integrates Cocos2D with Lua. It was a good run, but it is tiring...
Email Post
Labels: CoronaSDK Disappointment Objective-C Thoughts