There are good practices and then there are those that work, but are not necessarily good. There is a difference between a good programmer and a programmer, and NO the difference is *NOT* "Good and Evil" but the methodologies employed by the developer/programmer. In the 80's and the 90's when Computing was kind of new and mostly non GUI, there was great emphasis on practices and methodologies. It is almost such that at one glance of the code, you can tell if the developer has any coding vices.

Now with mobile development, the developers want to squeeze every bit from the device. However said, when posting code on the forums/blogs/magazines the code has to be easy to understand. Optimised code is good for compiling where as *generally* non-optimised code is what is shared. The difference can be in ms but these few ms can be very critical in a screen/animation/audio jitter and smoothness.

It is nice to inculcate good habits, but it is easier to inculcate Bad Habits and retain them. The things that gets me is that the Staff at Ansca, that recommends and writes articles on optimization and good techniques miss the most basic of them all, this has been discussed and it still remains. Donning the Hat of an Academic, I would say that if this definitely is a person that has not been through the rigorous shaping via code writing. If a person has not attended University specific to development related programs, but has written enough code, they can at a glance know what the issues are and will not repeat them and will take extra precaution dealing with those areas. If the person is a university graduate, then they would have studied the fundamentals of programming to the extent that they *will* not make the silly mistakes. However, we are all human.

I look back at some of the code I have presented, there can be some typos, both in the code and the text, now who said writing code in a webpage is easy specially when there is no autocomplete or highlighting or autocorrect. Plus this interface highlights every other word as a typo given the British English and American English differences, like Color and Colour.

However I cannot help notice this glaring *ERROR* found on http://developer.anscamobile.com/forum/2011/12/03/tips-optimization-101
tip #5 and the irony is that the discussion is about *Bad Practices*

The offending code that has sparked this blog post is 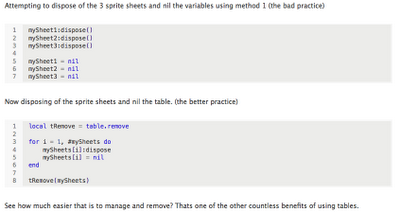 This by no means is the acceptable way to deal with removals in loops. Irrespective of *in this context* this is a practice *never* to be employed when removing items

the *correct* method is to use a reverse loop, from the max to the first item and removing them that way. so the code *should* look like


if this code was removing items from a group or display objects, the code as per *Ansca* staff is


it will work without errors and problems.

What gets me is that this is *Ansca* Staff that writes these kind of posts, these are then read by the magnitude of developers that cling on to every word just because there is that Ansca Logo/badge that says "Ansca Staff". Just yesterday I had blogged about how another *Staff* member has been prompting users/developers to either use the paid options for code review or post to the community at large. So is this the quality of the Code Review and assistance that developers shall be getting if they were to pay Ansca in excess of $150-225 / hour? Is this what they are spreading as *official* tips.

I have always maintained that there should be a delineation between Official Capacity and Personal Capacity. That is one of the reasons why many emails have a disclaimer at the bottom that states that the opinions of the person are theirs alone and not of the organisation. However in this case, Ansca stands by every staff member, which is a good thing but that is of concern given the events.

This is one example, there have been and are plenty more examples of such anomalies. I get a feeling that the good stuff that CoronaSDK was made of is now getting diluted, not because of the complexity, but because of the quality of code that goes into it. Walter, Eric and Tom have worked hard to being this to a stage it is, but instead of becoming rock solid, it is more temperamental and shaky. I do hope that it does become stable and is adopted, but then I am also critical as it does affect me and the developers that might be or not be aware.
Email Post
Labels: Code CoronaSDK Disappointment HowTo iOS Rant tips