Here is a new version, completely redesigned with the facility to add more features into the app as the community starts to use it and find it useful in their developmental needs. Here is a brief run through on the new features and what they do and how they are useful.

One main feature of this new version is the Document interface, which means there can be multiple windows open (Documents), each with a list and can be saved or loaded to/from the disk. (Saving/Loading still being considered)

The other feature is that instead of just being able to add display objects, like in the earlier version, this version allows for 3, yes three code snips, the entire Display collection as in the previous version, an AlertBox complete with multiple buttons and code to handle the buttons (if you want to) and Transitions with complete control on them with the facility to have the onStart and onComplete functions if you so wish.

All the code generated has print() statements and --TODO: comments so even as barebones it might be, it will demonstrate what is happening, easy for anyone to see and learn.

In a project, there are times when multiple display objects are required to be placed on screen. So it is a matter of just adding a new display object, the type that is required, set the parameters, click OK, and done, add another and so on...

Why is there no Physics body support?

if that is a question in your mind, the answer is simple, Physics bodies require slightly more than just some parameters, they could require a bounding mesh, at this stage, that was not a priority and there are some wonderful Physics Editors available.

Why can Code Generator not become a full fledged Editor?

It could, maybe one day, but then it could even stop being FREE. However for now, there are some wonderful packages available like IndeED and ProjectManager these do a wonderful job and again the priorities do not dictate an overlap at this point of time.

Can I provide feedback and suggestions?

Yes you can - write on dev[at]oz-apps[dot]com, even if they are in the lines of we do not need this tool, let me know, it saves me time and effort, working on features that *might* not be useful but instead spend more focused time on tasks that could be useful.

What happened to the SDK/API Viewer?

There is a wonderful openSource software called Ingredients this is an AppleDoc viewer, so if someone converts the API into AppleDoc format, it will work and look so much more beautiful. Secondly, the users that did respond mentioned that they are more interested in a composite source code collection than an API Viewer. So instead of seeing what showAlert is all about, they would rather want code samples for showAlert.

How do I use this?

Well, you can create display objects (Image, ImageRect, Rect, RoundedRect, Circle, Line, Text), set the parameters for their positioning etc and it generates code for that ready to be posted into a project with all events etc. 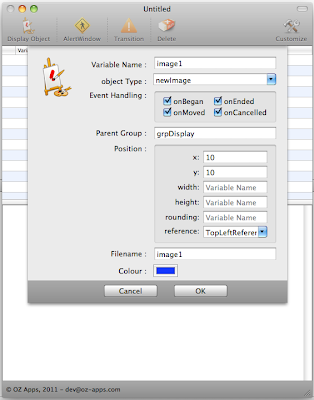 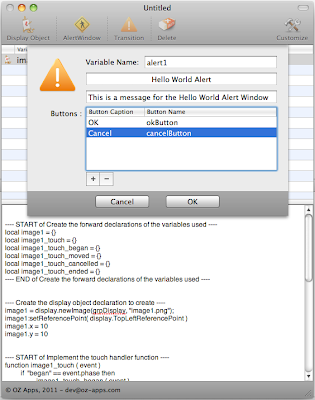 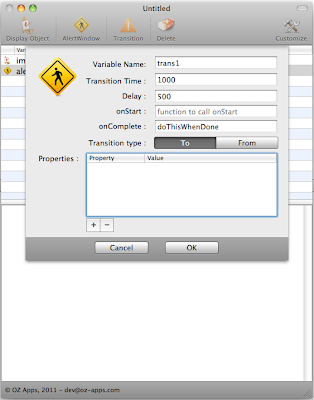 On a closing note, you might have noticed that nowhere did we mention the word Corona, there was a post on the forums where the words were copyrighted and trademarked, it is still unclear, so for the purpose of this post, the word has been avoided totally.