Like before painting a picture, an artist just practices strokes, or an athlete practices before the final meet/race, to get rid of a feeling of procrastination, I wanted to try out a project, just to keep the mind busy.

Now many of you might not have been born at the time this game was made and released. It was a Nintendo classic on the Game Set and Watch devices, it was called Turtle Bridge. The idea is simple, there is a bridge made up of turtles which can dive to catch the fish, you are to jump across these turtles and carry cargo over to the other side. The movement is simple, ahead or back, and if you step on a turtle that has ducked to catch a fish, you are swimming with the fish yourself.

So I thought, why not attempt that game and also make a tutorial while at that. This will not only some to maybe *learn* a few things about game making plus it will also force me to write code that can be presented on the web, win-win. 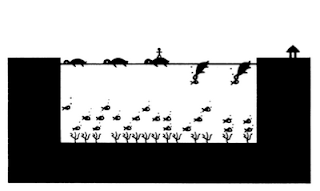 Now, the difficult task, either make it a small mini-series that unravels everyday or what? I have to also make the graphics.

Keep an eye out for progress on this one.