Make use of the HP Touchpad

Unfortunately HP decided to can the TouchPad and offered it on sale for $99 (16GB) and $ 149 (32GB). I had no liking for the Touchpad but the price was such that I couldn't resist getting a piece of it for me. I got myself a 32GB Touchpad. Now the question was like in one of the Hitler Spoofs, what would I do with just 1 touchpad? I did not want one to sell on eBay, I wanted to make use of it.

Let's look at the specs on this thing first. It has an 1.2 GHz dual-core APQ8060 snapdragon processor, quite an advanced CPU for mobile devices. It has 32 GB of memory, It has a light sensor, accelerometer, compass (magnetometer) and gyroscope. It has a 9.7" XGA capacitive multitouch screen (1024x768) and speakers and beats audio, a front facing 1.3 megapixel camera (only used for voice chatting), Bluetooth, WiFi. Now given all these specifications, it is worth the price. 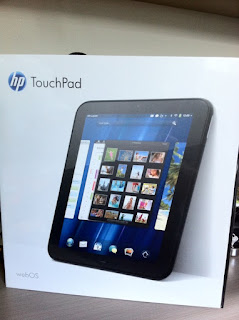 What can we do with this? This was the original question. I had signed up as a WebOS developer when the Pre was announced and I have honestly, not even tried to write a single line of code, thought I had downloaded the SDK and the simulator that ran in VirtualBox. So with my first, (actually second time, the first time was when I saw this in Harvey Norman in Melbourne on 14th August) feel of WebOS, I was impressed with the slickness and the feel. And surprisingly it had a large selection of apps to choose from the Marketplace and FREE. again as Hitler had said (in the spoof video) how long can one play the silly Angry Birds game? Then a lot of people were tweeting why not port Android on the device. 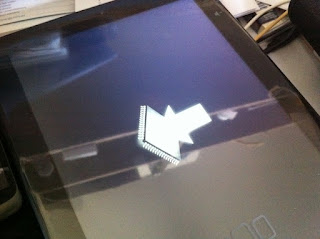 Will I be able to do the same? Yes, that is the idea. So here's how one would go about trying to install Ubuntu or a Linux flavour on the Touchpads.

Step #1.
To connect the HP Touchpad, the first thing is the Novacom communication drivers. This shall install the drivers and apps on the Mac. I found a lot of web pages that talk about these but very few that actually tell you where to find the same.
so first read up on the tool from here and download the jar file from here .

#2. Now we need to set up the Developer Mode on the device. This is a hidden app that can be brought up by either of the two ways.
i. in the find/serach bar (just type..) type webos20090606 and the first result that shows up is the "Launch Developer Mode" this is what we need to put the touchpad into developer mode. Now slide the slider to On and set the developer mode on.
ii. Is the Konami code upupdowndownleftrightleftrightbastart which is the second way to get the developer mode as above.

Please note that when you connect the touchpad to the USB the popup will be ask if you want to connect as USB or cancel, choose cancel.

#3. Now open up terminal and type novaterm, if you have installed the drivers and have the touchpad connected to the mac over usb, this should instantly give you a prompt with root access.

#4. Now we need to also install Preware this shall assist in installing other homebrew apps. With the help of the jar file we downloaded from step #1. once connected, we select the Preware app to install. Once installed, we can close this program. This also offers to download and install the Novacom drivers. 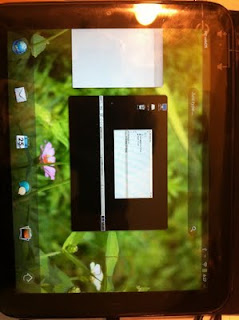 #5. Now we have Preware on the device, play around and install what you want, when the novelty has worn off and you are back to continuing installing Linux, we make a list of things that we want to do.

i. We want to partition the space to create a new ext type filespace.
ii. We want to install the three apps that we need, Xecutah, XServer, XTerm and UbuntuChroot
iii. And if we need the GUI based WM's, then we need to download those as well

#6. Dual booting? Not really, there is no dual boot, Linux shall run on the touchpad just like an app. Which is kind of cool, The entire kernel can be killed by closing the card. So the process is *supposedly* non-destructive.
So what we need to do now is create the partition. It is like what people did in the early 90's partition the Windows Drive to get a C:/ and D:/ drive. so follow the steps

Type these in the terminal on the mac that is connected to the device.


This would have partitioned the 32GB space to 16GB and created a new partition of ext3 type called ext3fs which is important for some other tools and UbuntuChroot.
Now go to the device and start Preware and install Xecutah, XServer, XTerm and UbuntuChroot. Some might get installed with Xecutah.


Now start Xecutah, it will have Three entries, xSserver, xTerm and Ubuntu Chroot, click on the XServer and a checkered black and white background shows up, next run the XTerm and lastly UbuntuChroot.

UbuntuChroot is the prompt that will allow all apt-get commands to download packages.

at this point if everything went right, you shall see a prompt on the tablet with half the screen covered with an keyboard that cannot be dismissed. 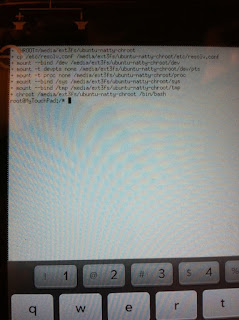 here type the following in the terminal


chromium-browser is the Chrome browser
lxde is a Lightweight X11 Desktop Environment and perhaps the best option for GUI on the Touchpads.
synaptic is the GUI package manager for Linux

now that all of this has been managed from the terminal, let us start the GUI environment, there are a lot of messages and warnings, do not worry about that.

To start the GUI, we type in startlxde and you shall get a lovely GUI environment. To get the keyboard to a size that the screen can be visible, tap and hold on the keyboard dismiss button, a pop up appears with letters that look like shirt sizes, XS S M L, choose the XS, the keyboard shrinks to a smaller size and the entire screen is visible. The mouse pointer can be moved using the touch panel, multi-touch will not work but can surely confuse th mouse pointer. It can be used for making selections, but the selections just go crazy... after all this distro is not as yet production ready, it is kind of stable but there are those moments where it gives up. Specially if you try to start a new terminal. A terminal in other WMs (Windows Managers) is even worse. 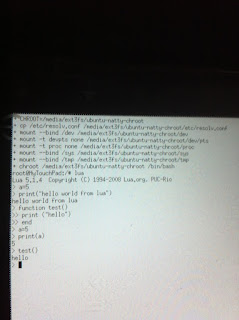 Some parting words. I started off with a computer whose interface was the editor, in those days it booted right into the editor. Then to DOS based systems that required a whole heap of command typing to get things done. Unix was heard of as the *dev* or the *geek* language which normal people have no need for, it is an enterprise thing. Then to windows where there was no more commands, but I still had to work with INI files and tinker the internals. Then when I undertook teaching Unix/Linux, it was a strange transition for me, it was a bit difficult or awkward to go from XP and Vista to Unix/Linux command line. It was here that I had spend countless hours talking to my students and helping them find their way through the terminal. Then when I got a Mac, the terminal was not alien at all, in fact it made quite a few things easy.

My thoughts on the Touchpad, I might have been a bit harsh on this on twitter, in fact when you think of it, the Touchpad actually has true multi-tasking and each app is a card which can be managed separately. It can be killed/terminated without affecting the other apps running. The Interface was created a while ago and I guess it has been the inspiration for Twitter and other apps to use that UI in their apps. It takes a while to get used to the UI, but once you do, it is really rocking. I loved the fact that I can leave skype logged in on one card and keep browsing on another and run Linux on another, have my email open on another and so on. All simulteneously, whereas even on the iPhone/iPad, these get killed when the home button is pressed to switch between applications, some might go to the background. So in terms of a superior OS, WebOS is *infact* a superior OS than the iOS. Also bear in mind that this is the first attempt, where as Apple has had several attempts till date on bettering their systems.

If you are planning to install Linux on the Touchpad, i would suggest that you familiarise yourself with Linux commands to be able to tweak it, it is not difficult, but it is not as easy as you might think it could be. Once you get it going, it is all the way downhill...just put on your seat belts and enjoy the ride.